Dog breeds can be classified into many different breeds defined by different characteristics. In this article we will go through a comprehensive list of the cold weather dogs. If you lived near the borders to Canada where things can get real cold real fast, you should check if your dog is in this list, or else you should step up on your effort to keep your dogs warm, especially during the winter.

The list of cold weather dogs is by no means exhaustive. We will cover the 31 of the best arctic dog breeds that you might probably not even heard of

The first dog that comes to everyone’s mind is the Siberian Husky. It is often associated with dog sledding and snow terrain. It has a thick white and grey/brown coat of fur to help it get through the harshest of winter, making it the most recognizable dogs for cold climates. 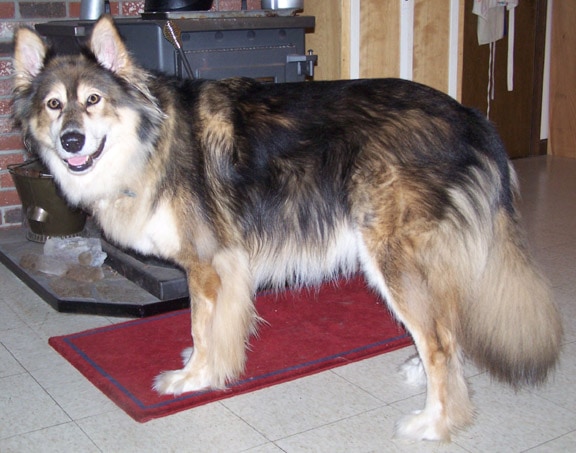 The Mackenzie River Husky is a mixed dog breed that is not yet officially recognized as a standardized breed by any big kennel clubs. It is a cross of various large dog breeds and its ancestry traces back to wolves. They have moderately long coat of fur that dangles from their body, forming a thick layer of insulation to braces them for the coldest of winters. 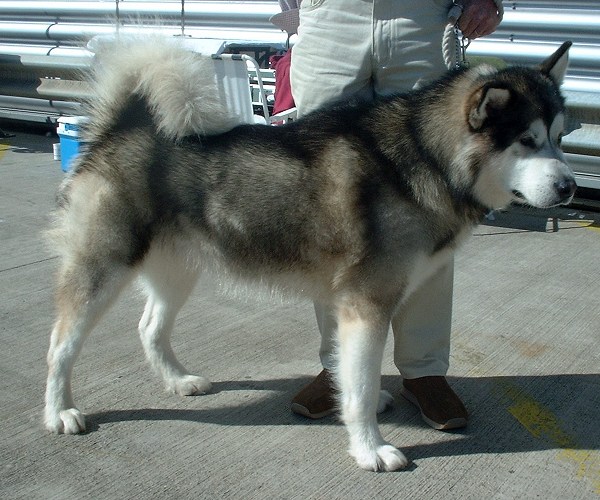 The Alaskan Malamute has a close resemblance to the Siberian husky in terms of the color of its fur as well. However, it is bigger and is considered as one of the large dog breeds, unlike the husky which is only medium sized. Its body is well covered in thick fur, including its tail. Its well-furred tail keeps them warm when they curl up. You can often see them wrap their tails around their more vulnerable noses when out in the snow.

The Canadian Eskimo Dog has a double fur coat. The topcoat is thick and dense while the soft undercoat consists of stiff and coarse hairs. It gives the dog a thick armor to defend against the cold. Unfortunately, its breed is facing extinction.

Not to be confused with the samoyed and the spitz breeds, the American Eskimo Dog is a cold weather dog that bears a thick layer of soft fluffy coat as its defense against the cold. They make good watchdogs, and are excellent with children.

The Greenland Dog has an interesting coat of fur. It is of medium length and consists of 2 layers. The inner layer consists of fur that resembles wool. It traps heat efficiently to keep the warmth from the core of the dog’s body from escaping. The outer layer consists of longer, coarser hydrophobic fur. It guards the dog’s body against moisture in the air effectively, thus preventing the cold from penetrating the body easily. 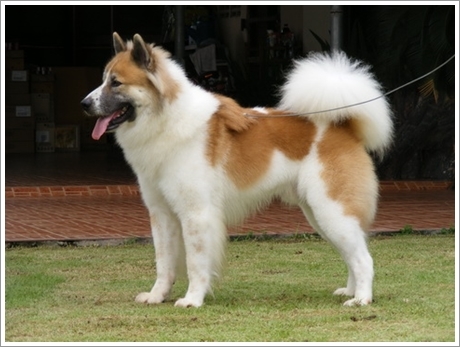 The Thai Bangkaew Dog is a furry dog. It has double coat, with the top fur is made of coarse guard hair. Its fur is thicker and longer around the neck, chest, and back, making it resemble a mini lion. In addition, these areas of lush thicker furs are key areas of the dog’s body where heat is produced. With extra protection surrounding these areas, the dog does not lose heat as easily, making it a very versatile cold weather dog.

Resembling a mix between a Samoyed and a Malamute, the Kintamani Dog is clad is a lush medium length coat of fur. They care a lot about their territory and can get aggressive about it, but they are affectionate with their owners. 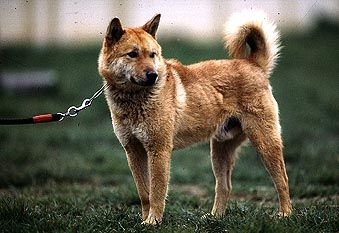 The Guejae Gae hails from Korea. They bear a plush coat of fur made of coarse hair. They are social, affectionate and loyal cold weather dogs known for their gentleness.

The Yakutian Laikas belong to the Laika dog breed from Russia. As a fun fact, Yakutsk is one of the coldest and the biggest city in the Sakha Republic of East Russia where temperatures can reach minus 40 degrees Fahrenheit. These specific breeds, who bear the name of this cold city, thrive very well in the arctic and are commonly employed for dog sledding work.

The Akita originates from the mountains of northern Japan where things can get very cold during the winter. This mountain dog has a thick double coats to help it get through the cold. Its paws form a tight knuckle which prevent the accumulation of snow, making them less susceptible to frost bites.

The Anatolian Shepherd comes from Turkey, a region that one usually do not associate with snow. But the Anatolian has its harsh aspects as well due to desertification. It gets very cold at night, and freezing during winter. This cold weather dog breed have adapted and grown a thick, albeit short, coat of fur. 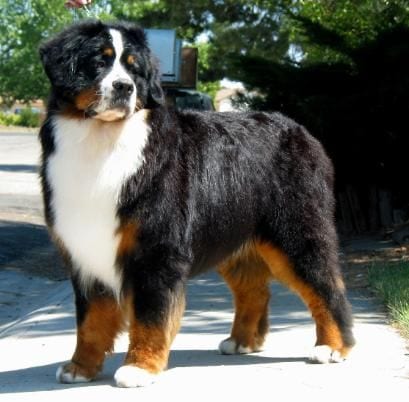 Yet another mountain dog, the Bernese Mountain Dog is a large dog breed. I has a considerably long, amply exuberant coat of hair that acts as an exceedingly well made armor for winter.

Chow Chow hails from northern China conditions can turn very harsh. They are a large dog breed with a thick fluffy coat of coarse guard hair. The hair is medium length relative to the size of the animal, but it fact it can be long on absolute basis, which makes it an ideal natural defence against the cold.

The German Shepherd is one of the toughest dogs out there. In many parts of the world they form the canine unit of the police and military force. They are biologically tough and sturdy, and has an adequately thick coat of fur to protect them from the cold.

A large dog breed from the cold mountains of  the Swiss Alps, the Greater Swiss Mountain Dog has a double coat, with the topcoat ranging from short, straight and fine hair to long and coarse fur. They are commonly identified by their black, white and rust color on their furs.

The Great Pyrenees are the polar bears in the dog species. They have a beautiful white long fur coat that can look really stunning when properly groomed. Their thick coat of fur serves as a strong insulation to prevent the heat from dissipating easily. 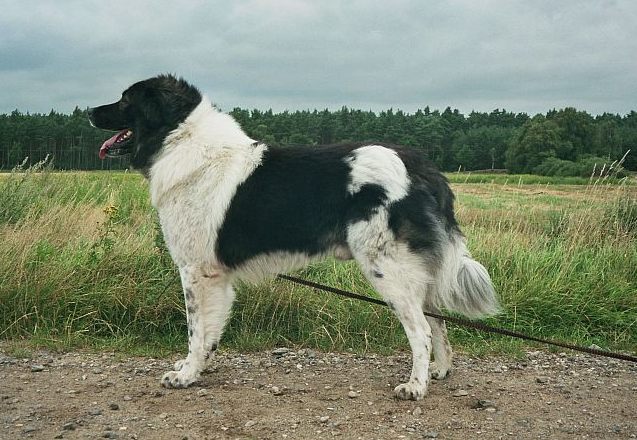 The Karakachan Bear Dog are herding dogs originating from Bulgaria in Eastern Europe. They are a tough breed that shows no hesitation to protect their owners’ stock. They don a thick layer of coat made up of 2 distinct lengths. The short hair being about less than 5 inches and the long hair being more than that. Their coats are usually made of dark and light spots. 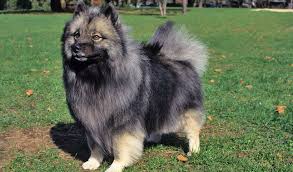 The Keeshond has a rich layer of fur on its coat made of a mix of silver and black fur. The amount of hair thickens around the collar, giving it a lion-like ruff that protects the core of its body where heat is generated. 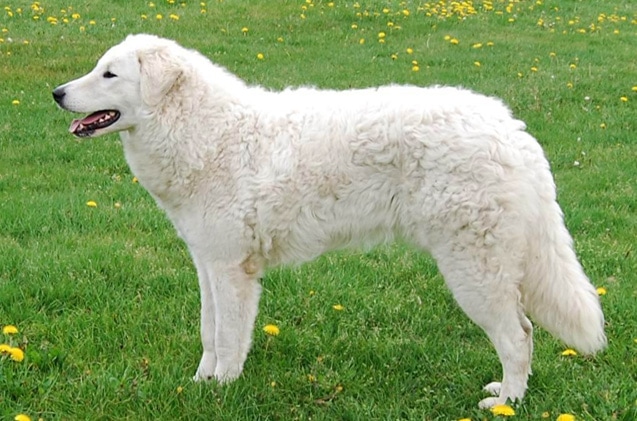 Yet another breed of Eastern European origins, the Kuvasz is a Hungarian herding dog. They have been around since ancient times as recorded in old Hungarian texts. It has a lush coat of wavy fur. 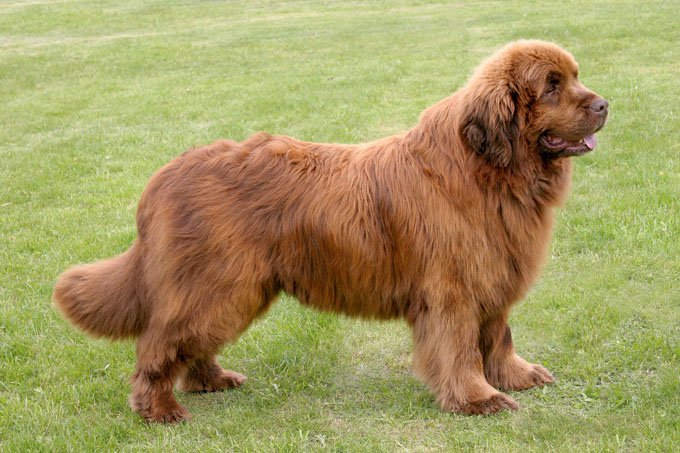 The Newfoundland is a large dog breed with thick and straight fur. Its large size is partially due to its large bones. They are calm but strong, making them somewhat gentle giants among dogs.

A representative from Scandinavia. The Norwegian Elkhound has a muscular build and a double coat. It has coarse a topcoat of fur made of straight hair, with a soft undercoat. Originating from Norway, you bet it can survive well in the cold. 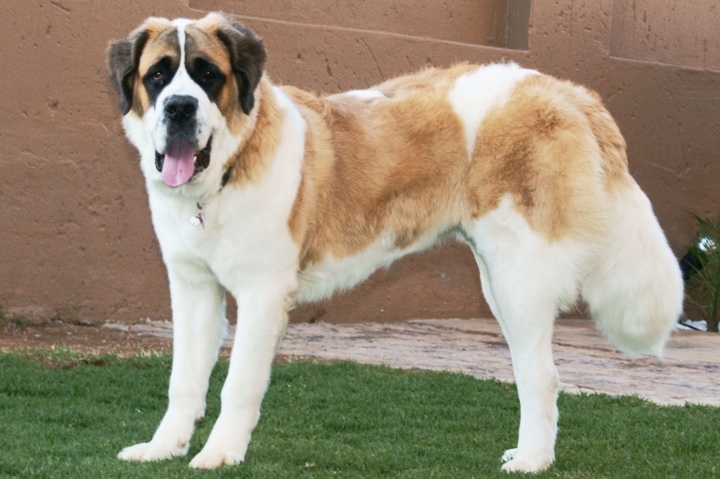 The Saint Bernard has an impressive track record for rescue missions. It is a large dog breed with a dense coat of fur that may be both rough and soft. Its neck and limbs tend to have a thicker cluster of fur, making them aptly structured to outlive the cold.

The Samoyed is very close to the Great Pyrenees. They have a long double coat with abundant fur. These fluffy creatures were historically used for herding reindeers and sledding, due to their resistant to cold.

The national dog of Japan, the Shiba Inu closely resembles the Akita. It belongs to the small to medium breed category, unlike the akita which is a large dog breed. It might not have the thickest and longest of fur as compared to the other dog breeds, but it is enough for keeping itself warm due to its relatively smaller size.

The Mastiff is one of the largest dog breeds of the world. In fact, the largest dog in recorded history belongs to the Mastiff family. The Tibetan Mastiff is naturally a large dog breed, with much thicker layer of fur as compared to its other gigantic cousins. It is a mountain dog breed that lives high in the Himalayan ranges. To be able to counter the cold, it is blessed with a long double coat. 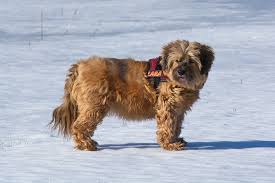 The Tibetian Terrier just like the Tibetian Mastiff, is a mountain dog that lives in the same region. It has thick bushy fur that gives it a shaggy like that of a beggar. It has a wooly texture that can properly keep itself warm in the harsh winter conditions the Himalayans offer.

The Caucasian Shepherd is a mountain dog breed from the Caucasus Mountains. It is huge and muscular with solid bones. It is born with a heavy double coat, with a profuse undercoat and an exuberant amount of straight coarse hair on its topcoat.

This is the only wolfdog I have put in this list. Wolfdog are a crossbreed between a dog and a wolf, and most wolfdogs do not occur naturally. Humans have kickstarted these artificial  crossbreeds practices to gain certain specific features of a wolf in domesticated dogs. This has led to a controversy behind these practices. However, the Kunming Wolfdog is an established example of a wolfdog and I will like to raise an example out of it.

Wolves have lived in the wild for centuries. Therefore, they are genetically more capable to survive in brutal conditions like the cold. It is no surprise that they are more resistant to the cold. The Kunming Wolfdog is a tough breed as well, being trained in the military in China. 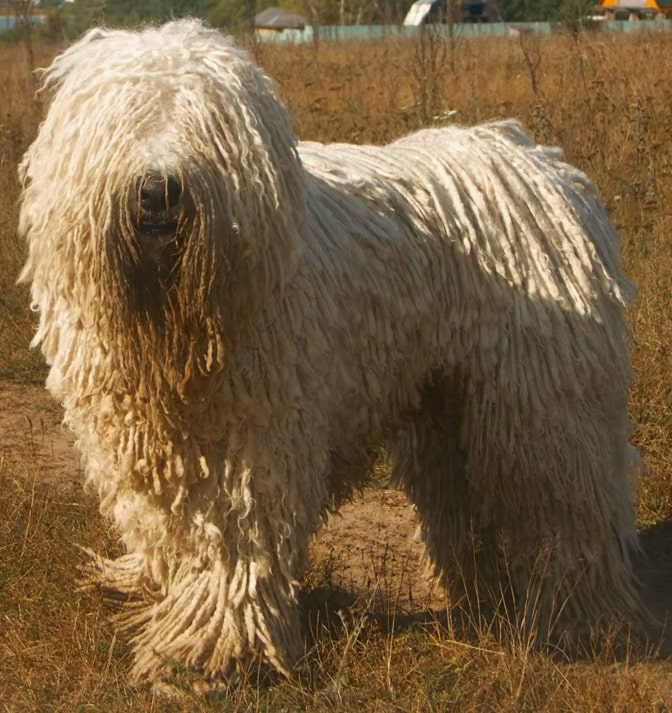 One of the most interesting dog breeds out there, the Komondor dog is literally a mop. It has thick matted fur that can grow really long. Among dogs, it has the most amount of fur. In exchange for looking drab, it is gifted with the potent ability to resist cold. 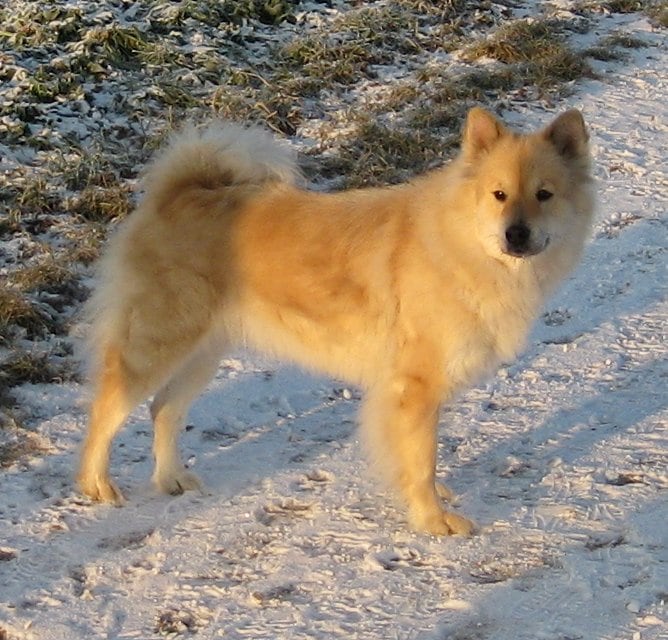 The Eurasier has a double coat, with thick undercoat and loose but abundant topcoat. They have a calm personality and do not bark as spontaneously as other dog breeds at strangers, making them quiet but reliable watch dogs.

Most of these dogs are generally big in size and furry. A big body generates more heat as compared to a smaller dog. Coupled with a thick coat of fur, these dogs can stay adequately warm even during the cruelest of the winter months. However, we should still do what we can to keep the dogs warm during winter so as to avoid unnecessary injuries or illness related to the cold.